You can use CarPlay and Android auto without changing the original car screen. Plug and play.  BUY IT NOW 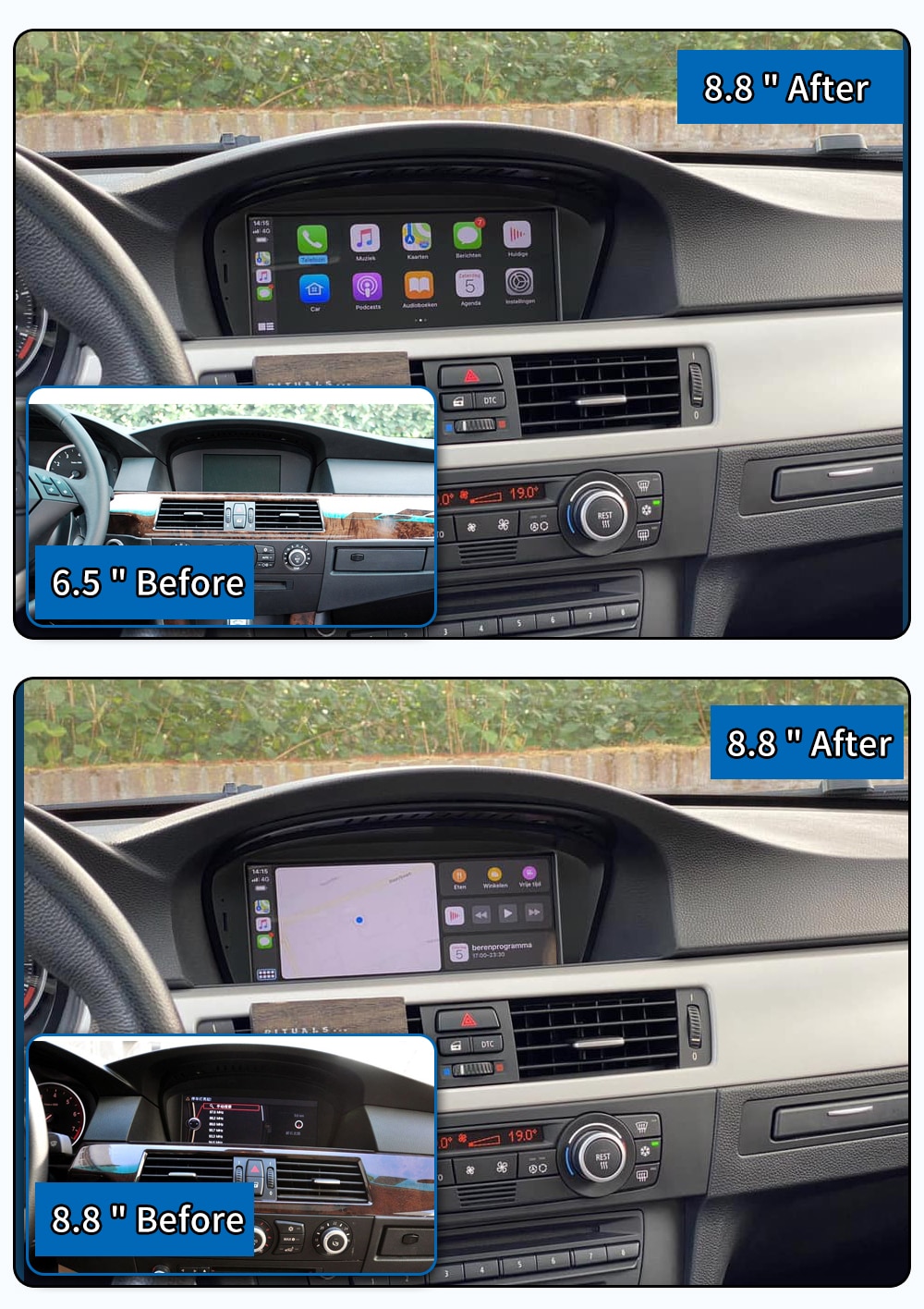 This is a multimedia touch screen with built-in compatibility with Apple CarPlay and Google Android auto. It will replace your OEM screen and add the following features to your car:

HOW DOES IT WORK?

While the unit (CarPlay/Android-auto Head unit) is inactive, the original video signal is passed unchanged and your car works as before.

When you reverse the car while using the CarPlay/Android-auto system, the system will automatically switch to the camera without manual operation.

You can easily switch back and forth between the CarPlay/Android-auto and your original head unit. (TIPS: Press and hold the “Menu” key to switch the system)

Using the CarPlay/Android-auto Head unit is optional and should be seen as an add-on and not as a replacement. The countries we can currently send to include the United States, the European Union, Russia, Singapore, Australia, New Zealand, Japan, and South Korea. Customers in other countries please consult online customer service.

Shipping Partners
We currently maintain cooperative relationships with 4PX, DHL, CNE and UPS. Our commitment to our customers is to assure the delivery reaches its destination in the quickest manner with the lowest cost.

Shipp Details
After the package is sent, you will receive an email with shipping information.
At the same time, we will also provide you with a Logistics tracking number through paypal.

We do our best to ensure that the goods arrive the customers safely.
If you find any omissions or damages during the receipt, please keep the outer packaging in time and contact us via email (wzxm@ewaygps.com) or messenger and provide us with evidence.
If the logistics information shows the receipt, but you did not get your product, please contact your local logistics service provider (local post) in time. And provide us with the corresponding evidence, and we will make an inquiry for you.
All claims for loss, damage or delay must be filed within twenty (20) days following the date of delivery or the date on which delivery should have occurred .
Under normal circumstances, we will provide you with a solution within 60 days.

Taxes and Duties
If you choose to send from China, the seller will be responsible for paying taxes. When the goods are delivered to you, you do not need to pay any customs duties.

If you choose to send from Germany,once the parcel reaches its destination country that your order may be subject to customs or import duties that are charged .
According to laws and regulations, these fees need to be paid by the recipient, and we cannot control the specific amount, as customs policies and import duties vary widely from country to country.Customs duty is charged as a percentage of the total value of the goods. The specific ratio will vary according to the policy of the country being sent, but on average is between 3% and 9%.
We generally try to reduce the declared value of the package to reduce taxes and fees, but you may still need to pay a small amount of customs fees.The proportion of this situation is about 1%, so you don't need to worry about it.

If you have other questions, please be sure to contact us：wzxm@ewaygps.com

All Andream units include a 2-year limited warranty.Some products only provide one-year maintenance service, please refer to the product page for details.

Within 2 year after you get the product, if your item(s) are broken or defective, You just need to return it and we will send you a brand new unit. For warranty support, please email us at wzxm@ewaygps.com.

This was my second purchase of Andream for two separate cars. Do you self a favor and cut the passenger side radio carrier off (halfway)to make tucking the wire harnesses in much easier. There are many you tube videos to watch for installation tips and tricks....Aside from that the unit works great1

If anyone is thinking about installing this head unit and reverse camera on their E61 BMW stop thinking about it and just do it. This has been one of the best purchases I’ve made. Took only a couple hours to install the head unit and test the reverse camera one day and a couple hours to install the reverse camera the next…really makes this 14 year old car feel like it’s brand new. 10/10 would recommend. Beautiful display, quickly connects to my phone, and reverse camera is very clear. No instructions were included but YouTube has plenty of videos of similar units and is a very easy install…now there is not instructions for reverse camera install on E61 (wagon) but I found a thread which basically said to route the reverse camera cables in the headliner…it is a PITA around the hinge, but like I said it only took a few hours to completely route the cables and get it working…took a bit of playing around in the settings to get the OEM iDrive display centered perfectly and working properly. As far as the glare goes, I haven’t experienced it yet, but heard there are screen protectors to help out with this.

Product is great so far, had a few issues and was a pain in the —- to install but got it in and it works great looks great, glare can be pretty bad but I mean for being the cheapest head unit, quickest shipping, and quality it’s great, only issue I do have still is because I have no back up camera a weird screen showing the factory screen pops up when in reverse soon should be fixed by getting a back up camera, and then the factory screen also has a weird resolution i still haven’t figured out those 2 things are the only reason it’s not 5 besides that everything is good also no instructions but not hard to figure out

I absolutely love this screen. The install is a bit annoying but that’s expected with almost any European car. It is a major update from the factory unit, and it is very nice to be able to flip back to the old factory screen. Before my order was fulfilled the company reached out to me and asked for me to provide photos so they could confirm I was to receive the correct screen for my car. This made me feel very confident in the product choice and I am very grateful for them doing this.

Ordered and installed two Apple CarPlay/Android Auto HUs on two LCI (post 2008) E60s, replacing one with OME (no nav) 6.5" screen, and another with OEM navigation 8.8" - both (M-ASK/CCC) work equally well once setup properly. The rear view camera is another major upgrade for these E60s, making you feel like driving a modern cars instead. iDrive and steering wheel audio controls continue to work just as before.

As others have said - there was no installations instructions included. However, the process was pretty much straight forward once you know which connections to make; and which to leave unplugged :)

Here are a few tips besides those that have already been mentioned Steven H. and other reviewers:

. If the original car display aspect ratio is off (seeing conked/half screen of OEM screen, for instance, especially if you're upgrading from nav. 8.8" OEM), go to factory setting (use code '1368'), and select the correct original OEM display type. Don't see it displayed on the screen? Use the touch screen on the right side to scroll down - it's there, just that the scroll bar is missing (reviewer Greg W. in SD had this issue, I believe)

. If your audio cuts out putting the car into reverse, check (or unchecked - I forgot which) the reverse camera audio silent from the factory setting - no more audio interruption.

. If you're installing a rear camera, you'd only need to run the yellow RCA (video) with built in positive feed from the trunk to the HU. For the trunk side, connect the positive (red) feed to the positive feed (red) on the camera/trunk latch, leave the black/ground disconnected. On the HU side, connect the positive feed (red) to the pink lead (labeled as 'CAM POW'). That's all there is to it, no need tap into reverse light circuit nor using the small power block included in the camera kit.
Camera works like a charm, come on when putting into reverse; and cuts out in a few seconds after putitng back into drive.